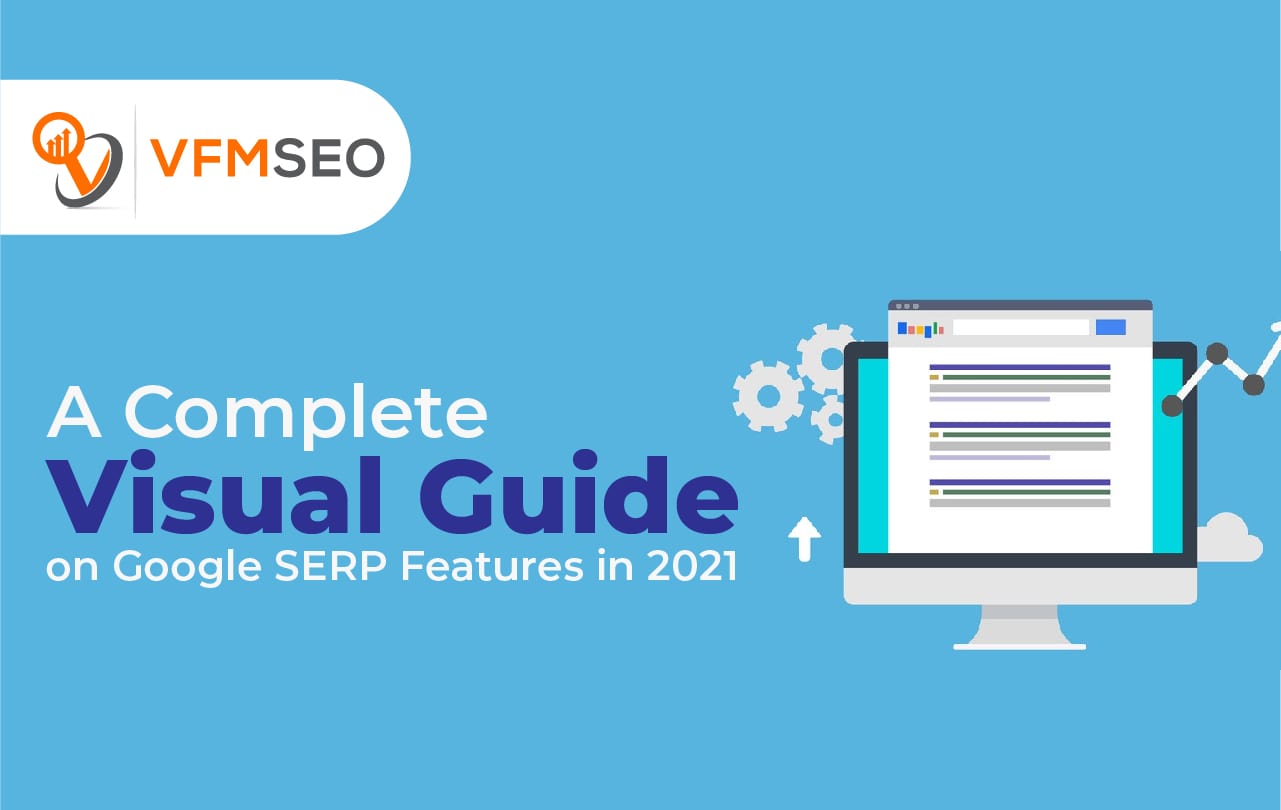 A Complete Visual Guide on Google SERP Features in 2021

SERP stands for Search Engine Results Page. Its “keyword identifies the SERP,” or the query that generated it. A SERP can contain organic results, paid results, and SERP features.

Now let’s dig a little deeper into what SERP features mean. The phrase SERP feature is not an official term. These query results are known as “search result features” or “rich results” by Google.

In addition, Google may apply different terms to specific search result features that mean the same thing. It may sometimes confuse.

Rather than call this event SERP to feature an “enriched search result,” Google refers to it as an “interactive rich result.”

To clarify, we will define a SERP feature as anything that adds something new to the traditional format of a results page with only blue search results links and descriptions.

Google continues to test and improve these unique features to make its search engine more user-friendly.

The term “SERP feature” will be used in this post rather than “search result feature” or “rich results” since it is more widely used.

Google can answer a search query without the user ever clicking through to a web page by performing a zero-click search. Search results present answers based on what Google interprets the user’s search intent to be.

This has enormous implications for SEOs everywhere. It’s the reason ranking in SERP features has become an SEO’s bread and butter.

What is going on? Depending on who you ask. The company is either becoming a “walled garden” or evolving to meet the needs of “mobile-first” searches and voice searches. All of that is probably true.

There’s no doubt that Google is evolving in its quest to deliver the best answer to every query. Thus, user intent – another massive concept in SEO – is so crucial to zero-click searches.

For instance, these could be the results of a zero-click search. However, only if the user intended to understand what esoteric means: We’re looking at several SERP features in just this example. The dictionary SERP feature gives us the definition of “esoteric.”

Only the very bottom listing from Merriam Webster is an organic search result. There are relatively few SERP features in this example. Often, users have to scroll even to see the top organic listing.

What effect is this having on organic search traffic? The answer depends on the industry you’re in, the keyword search, and other factors. Knowing this, even one type of SERP feature – a featured snippet – has been shown to reduce the CTR of a #1 organic SERP result by 39%. According to the same study, the value of a #1 organic SERP listing fell by 37% between 2015 and 2017.

The following are the most common SERP features in Google. These factors tend to have a significant impact on how people interact with Google’s search results.

In a Featured Snippet, a specific section of a webpage is highlighted. Present that section within the results themselves.

The process is pretty straightforward. The Google SERPs have two main Google Ads slots: One at the very top (above the organic results). There is another at the bottom of the page.

The average CTR for a Google ad is about 3%, according to Wordstream data. Ads affect organic CTR. However, much less so than Featured Snippets.

A Knowledge Panel displays Google’s data on a specific entity (like a famous person, company, or event).

Knowledge Panels differ from featured snippets in that data isn’t pulled from a specific webpage. Google gets its information from The Google Knowledge Graph. Knowledge graphs themselves are sourced from a variety of sources, including Wikipedia.

In the results, a video carousel displays a list of videos (usually pulled from YouTube). Previously, this was a static set of three results. Today, however, you can click the arrow button to see more video results (up to 10 in total). For most search queries, Google doesn’t show video results.

Nevertheless, video carousels are essential because they take up a lot of space on the SERPs (SEMrush estimates that only about 6% of searches bring up video results). Additionally, they usually appear at or near the top of the page. Thus, people are more likely to click on them.

An extra piece of information appears next to a specific result in a rich snippet. They’re SERP features in a particular search result. Typically, Google results in consist of a title tag, a description, and a URL.

Rich snippets provide additional information that goes beyond those three elements. This helps users decide whether or not to click on it.

In other words, if you’re shopping for a specific product, this can help you find the information you need without having to browse a significant e-commerce product page.

People Also Ask (PAA) boxes appear in 8.5% of all US-based searches, according to Advanced Web Ranking. You’ve probably seen PAA boxes before. In essence, these are mini FAQs embedded in the organic search results.

With PAA, Google aims to provide users with an easy way to find answers to their following query before even searching it. The PAA, as you can see, was designed in such a way as to answer an immediate question. A potential next search for them.

Local Packs (also known as “The Map Pack”) are displayed for queries that Google considers as “local.” Local packs have their parallel algorithm, which makes them unique. In contrast to Google’s ranking factors, local SEO is more concerned with optimizing your Google My Business profile, getting good reviews, and ensuring accurate NAP citations.

For local businesses, local packs are vital—businesses with a physical location. The reason is that local packs usually appear prominently in search results. Also included is an interactive Google Maps map. In addition, it has other visual elements that make it stand out from the different organic Google search results.